We released dye just north of the IB pier in the early morning hours of October 8th and tracked the dye for 2 days. The dye shot northward in response to a strong southerly swell driving strong northward currents. At first it was confined to the surfzone, after which it was confined to an alongshore band just outside of the surfzone. By the second day, dye was all the way up to the entrance to San Diego Bay (but in very low concentrations). Further south it was not at the surface, but it was found near the bottom! Very exciting data that we are looking forward to diving into. Here are just a couple of photos, more to come soon. 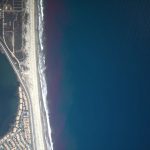 dye in a band offshore of the surfzone near the south end of Silver Strand State Beach, thanks to Luc Lenain and Stephen Holleman for this photo 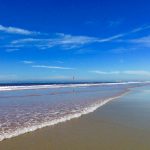 dye baths the surfzone and our stand-along fluorometer instrument. Thanks to volunteer Lori Covington for this wonderful photo! 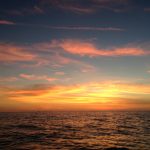 sunset from one of the sampling boats at the end of a long day on the water… gorgeous! Photo by Sarah Giddings