On Monday and tuesday August 24-25, we prepared moored current meters for deployment. This included installing battery packs, calibrating their compasses, performing instrument checks, preparing the frames they will sit on, and preliminary programming amongst other things. In these pictures, you see acoustic current meters, specifically Acoustic Doppler Current Profilers (ADCP), which using the Doppler shift to measure the water currents (speed and direction) throughout the water column and Acoustic Doppler Velocimeters (ADV) which also measure water currents but at only one location in space. The ADCPs will be deployed offshore throughout our experiment while the ADV will be deployed inside of the Tijuana Estuary to give us an idea of the currents driving the dye transport. 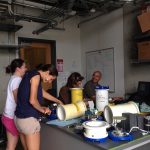 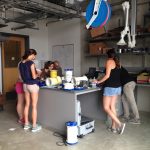 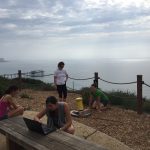 The entire Giddings lab group together! Isa, Angelica, Sarah, and Maddie are calibrating the compass on this ADCP 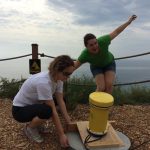 Maddie having fun with compass calibrations 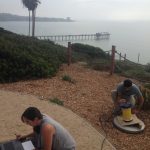 Angelica and Andre enjoying the most scenic compass calibration site ever! 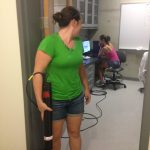 Maddie and Isa testing an ADV for the Tijuana Estuary 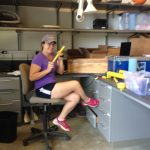 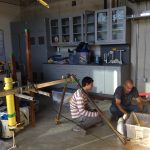 Geno and Andre prepping their moorings